Lorem Ipsum is simply dummy text of the printing and typesetting industry. Lorem Ipsum has been the industry's standard dummy text ever since the 1500s, when an unknown printer took a galley of type and scrambled it to make a type specimen book.

The quick brown fox jumps over the lazy dog

Filariasis is a tropical disease affecting over 120 million people worldwide. It is one of the diseases caused by mosquitos, and infects the body with tiny filarial worms.

Where does it occur?

Filariasis is endemic in approximately 81 countries across the world, mainly in India and Africa. Other regions include the Americas, South East Asia and the Pacific Islands. 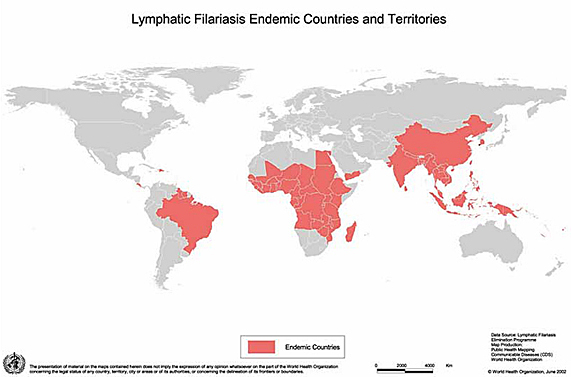 What are the filariasis symptoms?

The majority of infections are asymptomatic, but if the condition worsens to acute or chronic stages of lymphatic filariasis, there is an onset of swelling which becomes painful and can cause permanent disability.

Mosquitos deposit filarial parasites into the human body with repeated bites. These larvae worms live in the human lymph system where they grow into adults and live in the body for between 6 – 8 years, mating and producing millions of larvae.

How do you prevent filariasis?

There is no vaccine so mosquito bite prevention is the best form of defense.

How do you treat filariasis?

Filariasis is one of the more painful and distressing diseases caused by mosquitos. Fortunately, there are drugs to combat the infection in its early stages and surgical methods for later, chronic stages to help drain the lymphatic system of its unwelcome residents.

Disclaimer: The above information is to be used for educational purposes and not as medical advice. Please still take caution and seek a medical professional for further advice in regards to the above, especially if visiting prone areas.